British Paragliding Cup 2017 (Peaks Round) 5th - 12th August August is the new October. It may be a bit warmer, the days a little longer, but the depressions rattle in from the Atlantic with all the energy of Autumn storms. It’s never a good month to hold a paragliding competition - but still we persevere. 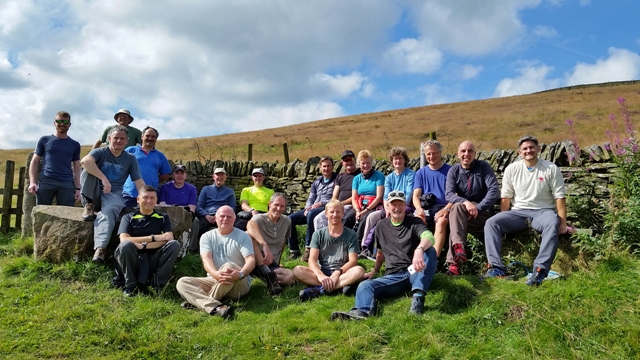 The final, week long round of the British Paragliding Cup was held from August 5th- 12th. For the fourth year our base was the Lancashire and Derbyshire Gliding Club complex at Camphill, sited at the southern end of Bradwell, and a convenient 30 minute walk from take off. As a base it would be hard to beat, welcoming, with a variety of accommodation, breakfasts, a bar. It’s easy to see why we keep coming back. As the week progressed, the evening menu went through a (design your own) pizza night, curry night, barbeque, a Sunday roast - and of course washed down from the ‘open’ bar. It’s a real home from home that makes sitting out the spells of unflyable weather very bearable. The other huge plus is the pilots and family attending … each year we lose a few and gain a few, but the extended close friends the BPC has evolved into makes it a very happy occasion. The wonder of it all is that we aren’t swamped with entries. It seems too few have faith in UK comp flying – but read on, we may have the answer.

What about the flying? We tried for three tasks and managed two; that didn’t seem bad for the weather we were dealt and the final task co-incided with one of those cracking UK days that almost magically appear amongst the dross.

After a blown-out Saturday spent catching up and chatting about the flying prospects, Sunday offered an early morning chance of getting a task in. We rose early and were laid out on take off by 9:30am. The wind was OK on arrival, the rather rocky and abrupt take off less attractive, but the ridge is 5k long and offers plenty of scope for close quarter racing. Actually, we went for elapsed time to spread the load around take off. Quickly briefed and kitted we could feel the wind rising accompanied by a nervous tension around a launch that was becoming increasingly unwelcome by the minute. A small number of the bravest, keenest and maddest managed to take off, but within 10 minutes it was obvious the wind had beaten us and the task was canned. 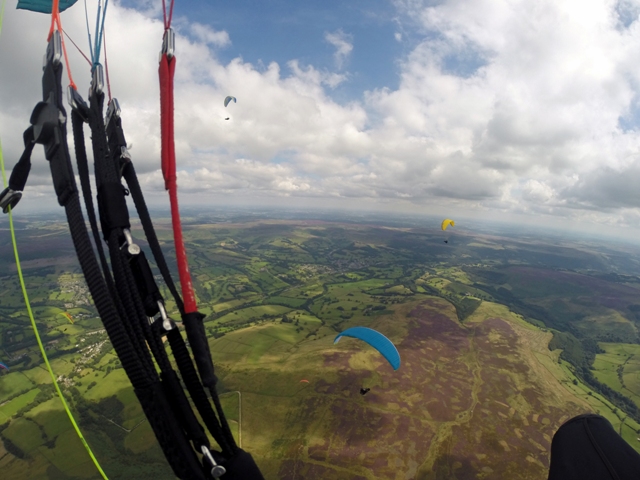 Our next flyable slot arrived on the Tuesday, not a bad looking day at all as we laid out on Bradwell. The sun was out, the clouds looked good, even though base wasn’t anything to drool about at a meagre 3500’. It was still a touch windy, but nothing to keep us grounded.

Gareth Aston is a master task setter. It’s really hard to match the conditions to the field, but credit to him he always makes good decisions. When he called a 17k goal to the edge of Sheffield I thought it less than ambitious – two thermals, a good drift, Hell! The whole field will be in goal in 30 minutes.

Wrong! It was a struggle. The fields around Hathersage claimed over half the comp which wasn’t a good start. Those happy few of us left, climbed out in dribbles of grudging lift over Millstone Edge or Stanage … if you got a little height and could clear the moors the drift got you to goal. If it didn’t it was a bus ride back from the far side. With my idea of an ‘easy task’ shot down in flames I was condemned to a penitent bus ride. Only two made it into goal, Brad Nicholas (Aspen 6) and Tony Blacker (Delta 2) ….. a little later Gareth joined them – just for the fun of it.

A BPC rule seems to be, “Never waste a day”. Whilst awaiting the forecast ‘big’ Thursday, David Thompson led a comprehensive debrief of the previous day, which is always good for a lengthy debate. We had various other talks and three of us took advantage of nearby Aerofix to get our gliders trimmed. Trimming is quite a technical exercise with its own jargon. Mine was described as ‘weird’, Lesters Gordon’s as ‘higgledy, piggledy’ ….. and Viv Fouracre’s as only ‘slightly out of trim’ – much more comforting. Still - trimming has a wonderful placebo effect.

One other subject that arose from the day was the shape of the 2018 BPC. Earlier in the year a combined Snowdonia Skysports/ BPC group had gone out to Krusevo, Macedonia, basically to fact find the idea of a week long round being held there, possibly preceeded by a guided week for those who wanted an extended break. The feedback was overwhelmingly in favour and Krusevo will be one of the rounds held during the latter part of June next year when it seems at its best. To retain the small, friendly atmosphere this will be of limited places, around 40 pilots plus family. As far as UK rounds are concerned, whilst not finalised, these will still take place in the UK, but as four day events, one of which will retain the Peaks round. The Pennine round is still on the cards too. It’s all looking very positive for the future.

The forecast held for Thursday, a great looking 100k day that would only be eclipsed by the following ‘Super’ Sunday - the 200k day. Bradwell was awash with wings, but the light winds and regular gentle cycles meant it rarely got busy in the air and it wasn’t long before gaggles of free fliers were drifting off downwind leaving the hill a less congested place.

Again, Gareth set a great task for the day – not too long, yet never too short. A 66k race to goal via an offset turnpoint at 33k near Bolsover. What he may not have realised was it was next to an excellent pub nestling on the side of the River Trent. Pub goals are worthy of consideration when task setting – definitely an extra incentive.

Due to the infrequent cycles the start got somewhat staggered. I was fortunate to get off shortly after the window opened, get an immediate climb out and tag the start cylinder just out front. A good start always helps – especially as I’m never the fastest. Over the next hour or so the field got spread out down the course, some having a relatively easy time, whilst the unfortunate struggled to transit from the high moors to the lower ground east of Chesterfield. I also had the good fortune to have Olly Sherratt and Toby Briggs help at key points in the flight. Olly really impressed – my initial inclination had been to lose him, until I realised he was a useful pilot to have close and keep tabs on. Toby, a fellow Dales pilot finds and works lift well – however, his navigation puzzled me at times, so in the end we parted company south of Mansfield.

Eventually it came to the long run in towards goal, all alone or so I thought, when an Aspen 6 appeared just in front and 400’ lower. From a late start Brad Nicholas had stormed through the field to pole position – cheeky! My height allowed a lot of speed bar until I drew level. Brad was on the very margin of his glide to make it so had backed off. I pulled ahead – rare for me. Never, think anything is in the bag! Nearing the end of speed cylinder, and thinking I was well ahead I put in a turn (crazy) only for Brad to shoot through below and nip the cylinder ahead of me by a mere few seconds. 10 minutes later Olly came in and an hour later Alastair Tytler brought up the rear.

In the end only a happy four of us made goal and enjoyed a few pints awaiting our scary taxi ride back thanks to the coffers of the BPC. It’s a highly recommended retrieve system. Later, at the download, Olly had the disappointment of discovering a missed cylinder at Bolsover; he’d set it to 500m, not 400m. A real bummer and hard to live down when you pilot Dreamliners for a living. 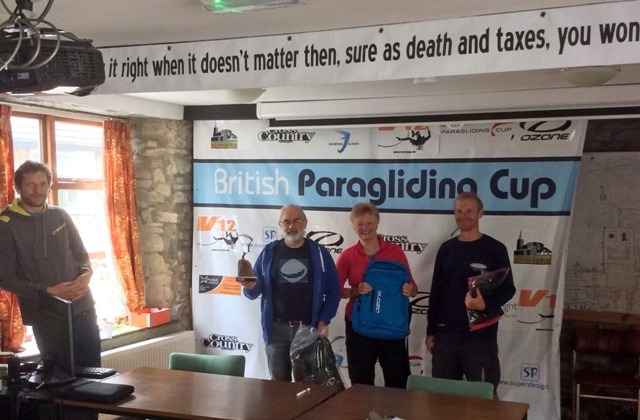 The next two days brought a cocktail of wind and rain which drew an end to the 2017 BPC. Brad Nicholas had done consistently well in both events and became the BPCup winner for this year. It was a tight final task with Viv Fouracre and Tony Blacker also vying for first place – but Brad hung on in there. It’s not a comp that features high on many UK pilots radar, but I think it should. Not only is it on our own turf and very accessible, but a great way to cut your teeth on serious competition tasks; it’s also an excellent learning environment and super fun - plus a lot less stress than the ‘other’ big fun comps abroad. Over the past four or five years we’ve battled with the UK weather and hopefully our 2018 compromise solution will partly overcome that. This year we managed four good tasks out of 11 flying days – not great, but next year we’ll surely double that with the help of Macedonian sunshine.

Finally, a big thanks to Gareth for being cool under fire and Viv Fouracre for doing lots of the donkey work, endlessly nagging Gareth and herding pilots. It can’t be easy.