HQ and camping courtesy of the Bowland Forest Gliding Club at the foot of Parlick.

Well what can you say, a long weekend ahead and a forecast of South to South West wind and thermals for 4 days. Be serious, it is North of the Watford gap and we are only allowed sunshine for 1 day at a time. 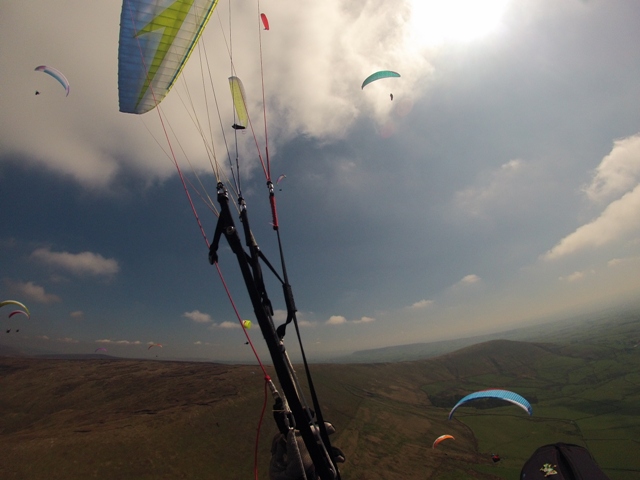 The forecast was for a gloomy start then to improve later in the day, so a cat’s cradle 10 waypoint task was set by our Meet Director Gareth Aston. Luckily for me I could not get away from work until after lunch and was there just in time to take part. So, I dropped in the van at the site and rushed up on the grom (motorbike), did not need to walk up too far and took off into a thermal and was off on my way. Got the first 5 waypoints but the sea breeze turned the wind west. However still done well and had 2 hours flying.

Forecast South West going West with sea breeze with low cloud base. Gareth set a respectable task of elapsed time to goal in Settle 27k, WTF with 2000ft to go across the moors. Thanks to the young, good looking and super fit Dougie who just went for it, I then decided what have I got to lose other than blood, sweat and guts with a hot walk out. I ended up at 9k ridge soaring Dunsop Bridge being very patient, not my best trait. Eventually I saw David Thomson come across and climb out and soon after so did I. Six of us landed in the goal field feeling very happy indeed and even managed a rather nice bite to eat in the Game Cock.

That night my good lady Gill was responsible for doing the BBQ for 50 and I had only 20 minutes to get the coals up and running, Phil was trying to rush me at the 20-minute mark but forgot I was working on Spanish time! Amazingly everyone was well fed and fuelled up for the next day’s flying.

Forecast was a lot better with a higher base and more South with the usual sea breeze forecast. Again, after much thought, Gareth came up with a great task of an elapsed time to goal at 47k.

Some tricky conditions to get away in and though it should have been following a gaggle, I found myself flying alone, must wear deodorant in future. After finding a great line towards Kirby Lonsdale, Viv and a few others bombed in Kirby and used the pilot down tactic. I was asked to look around Kirby from the

sky to see the glider that had come down on the reserve, hmmm it was a kite Viv, but your ploy worked as I landed 850m short of goal.

Please no more walk ups but again a stunning day and another great forecast. The sky was completely blue, and Gareth decided on a race to goal in Settle at 27k.

I thought all I need to do is get in goal don’t rush off, stay with the gaggle and try and fly back to Newcastle. What a plonker! Climbed out with a great gaggle and guess what? I flew off like an idiot. With my head freshly filled with local knowledge my cunning plan was to follow the ridge line as this works, only to bomb at 14k and watch the gaggle I left fly to goal and beyond.

What can I say? It was an awesome weekend for me, Gill (and the dog) I found the whole atmosphere and camaraderie superb. Although it was a comp it had the perfect harmony of flying and brilliant all helping in retrieves etc.

I came away a very happy chappy, so much so, I booked on to the Macedonia round in June and the Peaks round in August. A great combined job from the team and the weather gods to make it happen.

From our Northern Correspondent Gary Stenhouse.